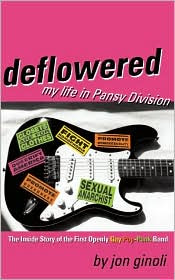 I'm sure that Amaz*n has removed the sales rating from this one...I mean, a band that sings regularly about sucking cock, getting fucked and being sluts -how could they not? (I suppose I should be putting some asterisks on obscenities - oh, wait, I already DID!)

Hmmm, they actually haven't, and it's not selling too badly (connection?). However, I would also like to point out that it's an interesting and thoughtfully written memoir.

As someone only 7.5 years younger than Jon, I could relate to a lot of his talk about isolation and feeling like one was the only rock and roll faggot on the planet sometimes.

And anyone who thinks the exploding drummers of Spinal Tap were difficult to keep should read of the challenges the group had retaining percussionists(and, in some cases, the problems that RESULTED from holding onto said timekeepers). Each time I saw them they had a different drummer - but that would be three times. I had no idea there were THIRTEEN of them!!

And, yes, bitches, there's dirt in it - shame on you for flipping in search of an index. Just keep reading - you'll find it. :)

Personal note - nice to see GB Jones name-checked. She doesn't get nearly enough mad props. :)
Written in fire on the wall by Timmybear at 10:32 a.m. No comments: