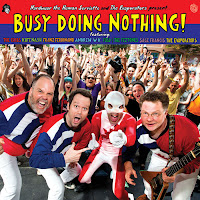 
Nardwuar and his gang have been around for more than twenty years, compiling both wonderful collections of others’ material and original material. This record basically cuts it down the middle, with 8 new selections by The Evaporators, 4 cover tunes of classic early Canadian punk-pop and an interview with Frank Ferdinand (the Scottish band, not the scapegoat/excuse for World War I), all in a hair under half-an-hour (which makes this a little on the short side for a compilation, but about average for an Evaporators LP).

The covers would be: England’s The Cribs covering early Canadian girl band The Dishrags’ “Death In The Family” (a record which allegedly came out on the British arm of RCA, though there are some doubts about this), in a short energetic burst fairly similar to the original, if not quite as hooky; Kate Nash doing cub’s “My Chinchilla” with quirky preciousness, except for the final minute or so when she rocks it; Franz Ferdinand xeroxing The Pointed Sticks’ “The Real Thing”; and Fuad and the Feztones’ perpetrating frat-rock wonderfulness on The Evaporators’ “Welcome To My Castle”, complete with saxophone and growly vocals.

On the subject of vocals that are most assuredly NOT growly, we have now arrived at the geeky garage-pop-rock of The Evaporators. Nardwuar can be an acquired taste, as both singer and personality; a friend tells me that he deliberately chose NOT to volunteer at a Vancouver radio station when he learned that Nardwuar worked there. Ooooh, burn…

Let’s start with the material where they are augmented by special guests. Andrew WK whips out his organ and plays with his ivory on “I Hate Being Late When I’m Early” and “Bring It On Home”, the latter also featuring the sultry contributions of Jill Barber. He also sings on the former, though only occasionally – it has a sort of boogie-metal-punk feel to me, though still nerdy (which makes sense, because I remember what the FANS of metal I knew in high school looked like… :) ). “Bring It On Home” is a cover of a song by a largely forgotten songwriter named Doug Rutledge from British Columbia, and is vaguely rootsy/country/50s rock and roll. Nardwuar manages to shed some of the acquired-taste squeak and adenoidal delivery he typically provides, though he is sort of speak-singing through most of it, until the silly ad lib outro – though at least Nardwuar rightfully thanks Andrew for his awesome keys-pounding. “Hot Dog High” which features Megan Barnes’ enthusiastic vocalizing, as well as Xaul Xan and Sage Francis rapping (I’m reasonably sure that’s a first on an Evaporators disc), is a chugging Ramonesy song whose title pretty well describes the subject, and to which I can only say that I hope it is possible to take some extra credits at Cod Collegiate or Salad Secondary.

“Milkshake Murder” is a surprisingly catchy, speedy number with a guest saxophone cameo by someone named Corinne Mundell, which is based on a real case in Canada from 1965, in which someone from Vancouver killed his wife with arsenic milkshakes and tried to use as his alibi the fact that he was up on a billboard to promote a car dealership at the time. The title track is sort of average garage-punk-pop, though still pleasant. “Bunk” has a theme much like “Rock ‘n’ Roll Radio” or “We Want The Airwaves”, though in this case more kvetching about the ‘news’ and how it’s generally telling the ruling class side of things. It has a great bass solo and super-bubblegum-fun organ, though I wanted it to be so much longer! “Pig War” is also based on an obscure Canadian-related event, but it’s over so quickly that I don’t feel like sharing the story (really, neither does the song), except that it involved a border dispute arising from a pig being shot. “All The Bad Girls” sounds sort of like The Cars covering Rockpile, if you can imagine that; in short, somewhat twangy/basic rock with a deadpan vocal style; at least until the shout-it-out last few seconds.

Nardwuar has mellowed a bit in his interview style, or perhaps it’s because the rise of so many GENUINELY hostile and VICIOUSLY sarcastic radio personalities has made him seem kinder in comparison. In any case, he wraps up this disc with a fun and informative interview with Franz Ferdinand. Though I haven’t really followed them since “Take Me Out” and don’t feel compelled to after this little taster, they do seem like nice enough folks and play along engagingly with the wacky host.

Oh, I almost forgot – this record comes with, in addition to the download card (in the past, Nardwuar comps came with the actual CD inside the LP – when Skookum Chief came out, you actually HAD to buy the LP to get the CD…), a Nardwuar vs. Bev Davies calendar that has photos and stories about various rock stars the latter photographed, in the form of a 2013 calendar (there’s a single page with just calendar grids for May 2012 to December 2012). This goes a long way towards augmenting the semi-skimpy length of the record, though the record is pretty fun as well while it lasts.

Written in fire on the wall by Timmybear at 7:29 p.m. No comments:

AT THE ROCK SHOW

Initially, there was confusion about this gig, both my fault and, to some extent, due to how the event was initially advertised on-line. To make a long story short (it is almost always too late to invoke that by the time you’ve said it), it developed that there were two shows that same evening (which was not clear when I bought my tickets), and it was originally billed as (that act) and The Raincoats, so I bought the tickets for (that act), thinking it was her and then The Raincoats, only to discover when things were updated that I had purchased for the wrong programme. After some frantic negotiations and communications with both Shirley (The Raincoats’ manager) and the event organizer, the boyfriend and I were on the guest list, so we got in cheaper than would normally have been the case, as the tickets for the other act were a smidgen less pricey. (By the way, the other act was Marnie Stern, an excellent guitarist – I would go see her on some other occasion, and would have loved to have seen her if she had been on the bill with The Raincoats, but I wanted to see the band, as there could not be that many more opportunities and, as it develops, they revealed during the intro that they had NEVER played in Canada before).


There was a very small group of people waiting at the door when we arrived at the designated time (it may not be very rock ‘n’ roll of me, but I foolishly still think the stated kickoff is when things will start), and the door was locked, which caused us some concern. A couple of employees who were going in were unclear when it was starting, though one thought the door would open in about twenty minutes. When that time arrived, we timidly knocked, and a woman came to the door and said she also was not sure when it was going to commence. That woman was, in fact, Ana Da Silva from the band! (It was both a thrill to speak to her, however briefly, and somewhat ominous, given that the GROUP was not sure when it was going to launch).


When we entered, I sincerely wish I’d had my video camera at the ready, as the band were all gathered over in a corner and Ana and Gina were doing dance moves to the Motown blasting from the jukebox. Candid YouTube moments, foiled again…


I’m afraid I hit the merch table in advance of the show, while I could still hear (which is when I had my second conversation with Ana, albeit in terms of her asking me to move my big bearish butt (no, not in those words) so she could get a snapshot of the stuff). I got a t-shirt of The Raincoats (I was glad to see that they actually had one in my size, though the band that recorded ‘Odyshape’, with its critical remarks about size discrimination, would have been ill-served had they NOT), as well as a 45 and a cassette (yes, a cassette) by the opening band, Grass Widow.


On the subject of Grass Widow – they are a San Francisco female trio, consisting of Hannah (bass/vocals), Raven (guitar/vocals) and Lillian (drums/vocals), who perform very intricate and rhythmically tricky/elastic songs, in a mode somewhere between Erase Errata (yes, I know it’s lazy to compare a female band from San Francisco to ANOTHER female troupe from the same place), Throwing Muses and, well, The Raincoats, which made them an ideal opening act.


Because of the interwoven nature of their vocals and arrangements, they were a bit ill-served by a murky mix, but it got better (because it gets better) as time went on, and they were an original and intriguing ensemble whose albums I feel obliged to acquire over time (their 45 and their cassette were both excellent, arty affairs, full of interesting lyrics, chorale voices and sharp angles).


And The Raincoats? Oh, my goddess, where do I begin? Ana (guitar/bass/not functioning sampler/vocals), Gina (bass/guitar/vocals), Anne (violin/guitar/bass/vocals) and either Vice Cooler or Jean-Marc Butty on drums (they didn’t introduce him and my research has not found pictures identifying who he is/was) took to the stage with ferocity and none of the alleged shambling and uncertainty I have heard of their shows. Gina, who had swept into the bar looking rather damp and wind-blown (yes, it was pouring the day they played…imagine the aptness), was looking ferocious and fabulous now, and Ana had the energy and inventiveness often attributed to women half her age, while Anne and the drummer were perky and on top of their game. They played the hell out of a wide swath of their material, even including b-sides such as “I Keep Walking” (more baleful and Velvets-touched than the studio take), as-yet-unrecorded gems like “The Feminist Song” and my personal faves “Don’t Be Mean” and “Babydog”, along with absolutely required numbers such as “Fairytale In The Supermarket” and “No Side”. My only quibble is that they didn’t do “Lola”, but one can’t do EVERYTHING.


And before we knew it, it was over. The boyfriend and I walked back to the hotel, on a now clear and not overly cool night, though I rather suspect I floated on a wave of satisfaction and glee. :)


Written in fire on the wall by Timmybear at 6:11 p.m. No comments: